We kept our commitment for 2007 and have already planned our 2008 contribution!

2008 Environmental Photographer of the Year

The CIWEM Environmental Photographer of the Year 2008 - competition now open!

It seems as if post-apocalyptic movies are en vogue again.
After the hugely succesfull 28DaysLater, Danny Boyle issued 28WeeksLater and is preparing for the 2009 release of 28MonthsLater!

Earlier this month, the release of the Matheson-inspired cult classic SF thriller "I am Legend", starring Will Smith will bring us back to desolate and vampire-invested cityscapes...

And last but not least: CLOVERFIELD... the viral video

Take this little quiz: which of the following did not happen in 2007

Email ThisBlogThis!Share to TwitterShare to FacebookShare to Pinterest
Labels: politics, The Matrix Today (not tomorrow)

Water & Health: the real and hidden casualties... right in front of us

From the excellent CNN article

The next time you fall sick and someone suggests it's because of something in the water, they could be right. According to the World Bank, 88 percent of all diseases are caused by unsafe drinking water, inadequate sanitation and poor hygiene. The number are daunting. Annually, water-related problems are responsible for:

At any one point in time, 50 percent of all people in the developing world will be in hospital suffering from one or more water-related diseases. Most will be children, water-related diseases being the second biggest killer of children worldwide (after acute respiratory diseases like Tuberculosis), according to Water Aid. (Diarrhea alone has killed more children in 10 years than all the people killed in wartime since World War 2, according to UNICEF).

Support the Flemish Red Cross' campaign on drinking water: donate to www.stubru.be and select your favorite song to play.
For the second time, the Flemish rock station hosts a 6day radio marathon to benefit a concrete solidarity action: our kind of music, our kind of action!

a Package of Dodgy Debt becomes a Structured Investment Vehicle

In your Faeces! what do you do with YOUR shit?

Do you know where your water comes from?
What do you do with your shit?

In New York, check out the exhibition in the American Museum of Natural History: Water: H20=Life. Today, more than a billion people still cannot get enough safe drinking water to keep them healthy. This kind of water scarcity isn't just about too little rain-it's a problem of lack of funding, politics, infrastructure and sustainable use. The AMNH exhibit explores the many facets of water. 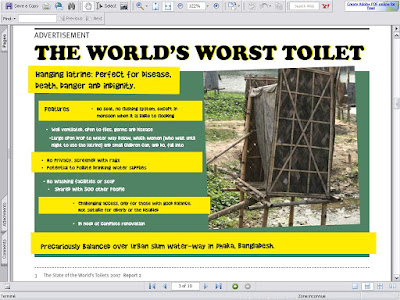