Most idiot job description of 2009

read in the newspaper interview of the failed attempt by activists to destabilize the Copenhagen summit in 2009-12: interview of XX, 21years old climate activist

He should rather have read Stewart BRAND, hippie and avant-garde environmentalist, and a true eye-opener: read last weekend's FT interview

For more than 40 years, Brand has been at the nexus between California’s counterculture and its technological avant-garde. A quintessential 1960s figure – one of Ken Kesey’s Merry Pranksters, he appears on the second page of Tom Wolfe’s The Electric Kool-Aid Acid Test – who organised a “trips festival”, which brought together 10,000 people to listen to the Grateful Dead and drink acid-laced punch, he is also a Stanford-educated biologist and anthropologist interested in information systems and networks. In short, he has foreseen the future; sometimes blurrily but more often than not with immense prescience. For Brand is an intellectual entrepreneur; he makes ideas happen. His 1968 brainchild, the Whole Earth Catalog, an encyclopaedic review of all that a commune-dweller might need, has been described by Steve Jobs as “sort of like Google in paperback form, 35 years before Google came along”. His latest book, Whole Earth Discipline, throws down a gauntlet to the environmental movement he once helped to nurture. 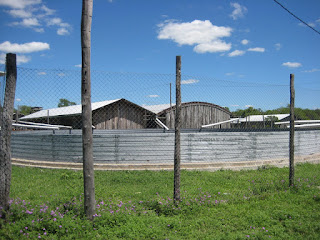 this water tank was built in 2003-2004 with gifts from friends at the occasion of our marriage! It provides water for drinking and bathing to over 500 children in the Paraguayan Chaco - thanks again to all kind donors!

For 2010, we wish you an excellent "Getting things done strategy":
"Write down, Defer and Delete, Review, Commit, Reserve time and Execute, Cycle back for criticism, Ditch the things you can and don't like, Have fun at each of the steps". (that's already a shitload of work before the "commit")

In addition, try some lateral thinking, jack-move your brain out of lethargy and "idée-fixe" and write some poetry...