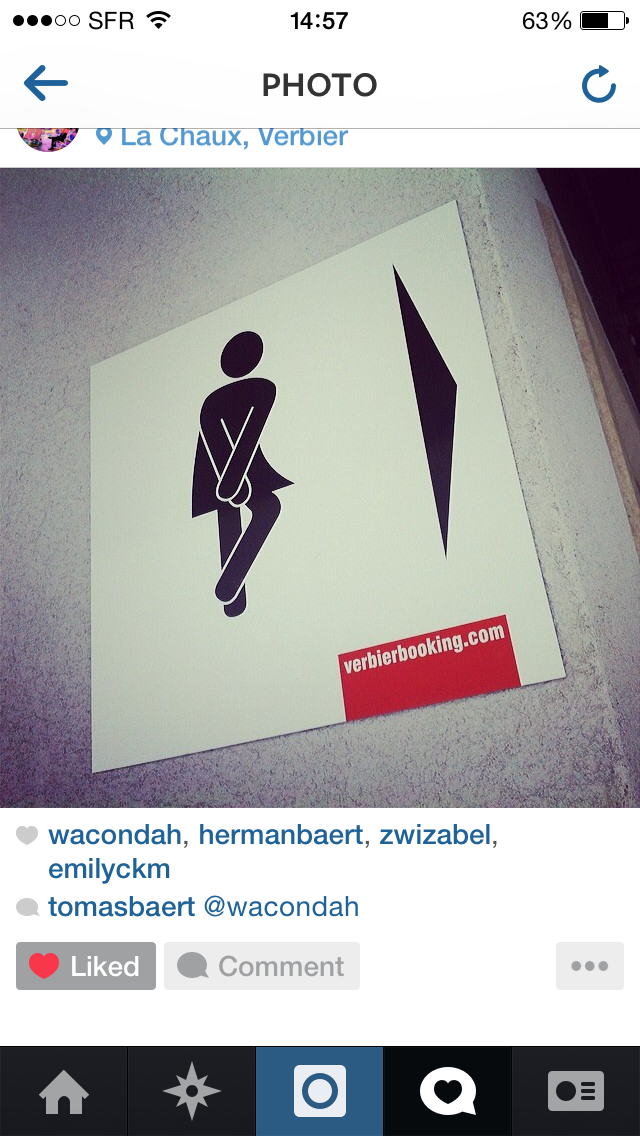 with #toiletogram on instagram, but also on the Wacondah Flickrstream; a collection of pictographs from around the world to reflect on our cultural differences and the essence of being wo)man! Le corps est un tube digestif!

Please reflect on the fact that 1 billion people are condemned to practice open defecation and that more than 2 billion people lack access to safe sanitary services!!

Do not go gentle into that good night

Dylan Thomas, 1914 - 1953
Do not go gentle into that good night,
Old age should burn and rave at close of day;
Rage, rage against the dying of the light.

Though wise men at their end know dark is right,
Because their words had forked no lightning they
Do not go gentle into that good night.

Good men, the last wave by, crying how bright
Their frail deeds might have danced in a green bay,
Rage, rage against the dying of the light.

Wild men who caught and sang the sun in flight,
And learn, too late, they grieved it on its way,
Do not go gentle into that good night.

Grave men, near death, who see with blinding sight
Blind eyes could blaze like meteors and be gay,
Rage, rage against the dying of the light.

And you, my father, there on the sad height,
Curse, bless, me now with your fierce tears, I pray.
Do not go gentle into that good night.
Rage, rage against the dying of the light.


the only thing missing in here is that in fact more than 2 Billion people do not have their right to safe drinking water fullfilled.... and that more than a billion people are forced to practice open defecation daily.

Timely video, ahead of next week's www.WorldWaterWeek.org in Stockholm.

While reviled and bashed by some, it still remains an interesting read; "10 Billion" by Stephen EMMOTT details the next decades' evolution of life on planet earth, pointing out some harsh truths that we seemingly WANT to keep on ignoring.

Finish it in a speed-read session and then reflect on his conclusions "we are f*cked".
Asked what the one thing would be to teach someone that could change the course of things, the answer is
"Teach my kids how to shoot a gun".

While you can, remain an optimist!
But it doesn't hurt sometimes to delve a bit deeper into realism...

Email ThisBlogThis!Share to TwitterShare to FacebookShare to Pinterest
Labels: X-file

"Astronomers say they have found the first evidence of “gravitational waves”, ripples in the fabric of space-time, bolstering the Big Bang theory of the birth of the universe 13.8bn years ago."


Scientists can now be more confident that the Big Bang triggered expansion at an unbelievable rate, with the newborn universe growing a trillion-trillion-trillion times in an infinitesimal fraction of a second.
“Detecting this signal is one of the most important goals in cosmology today,” said John Kovac of Harvard University, the project leader. Cosmologists not directly involved in the research joined the team in acclaiming the discovery as a landmark in understanding the universe.
Everything we can see today – galaxies, stars, planets and people – originated in tiny “quantum fluctuations” in space that were amplified exponentially by cosmic inflation.
Albert Einstein predicted the existence of gravitational waves almost a century ago and modern astronomers have been looking for them for several years with increasingly powerful instruments. Now the Bicep 2 radio telescope at the US polar base in Antarctica has achieved success.
“This is the most important result in our field so far this century,” said David Wands, professor of cosmology at Portsmouth University in the UK. The last discovery of comparable significance came in 1998 when astronomers found that mysterious “dark energy” was counteracting gravity and fuelling the expansion of the universe today.
The Bicep 2 telescope was built to analyse the “cosmic microwave background”. This faint radiation, which perfuses space, is often referred to as an “afterglow of the Big Bang”. It was released when the universe was 380,000 years old and, for the first time, cool enough for light to pass through space.
Although the microwave background has been mapped with increasing accuracy by satellite observatories – most recently by Europe’s Planck telescope last year – these maps have so far just shown variations in the temperature or frequency of the radiation.
Bicep 2 found subtle variations in the polarisation or orientation of the electromagnetic waves. Gravitational waves spawned by cosmic inflation would have squeezed space as they travelled through it, producing a characteristic polarisation pattern in the radiation.
“The swirly B-mode pattern [that we detected] is a unique signature of gravitational waves,” said Chao-Lin Kuo of Stanford University, another team scientist.
The South Pole is an ideal place to look for such signals because the atmosphere there is so cold, dry and stable.
The team says the polarisation is stronger than many cosmologists expected. Three years of data analysis ruled out other possible causes of the pattern and left primordial gravity waves as the only plausible explanation. “This has been like looking for a needle in a haystack but instead we found a crowbar,” commented Clem Pryke of the University of Minnesota.
Scientists will be looking to the next release of Planck satellite data later this year, which will include polarisation analysis, to confirm – or possibly disprove – the Bicep 2 discovery. Then they will be able to build confidently on inflationary theory as the basis of cosmology.

Reading: Stephen King
Viewing: the Blacklist
Listening to: Haim & Stromae & Pavement (puericulture in the morning kiddy run)
Thinking: Always be yourself, unless you can be Batman. then, always be Batman!
Travelling: Paris, often; the European Parliament (what a wonderland) and South Korea soon.
Last picture: JFK by wacondah.com - http://instagram.com/p/iDvh-vna-F/